This past July, my life changed in the blink of an eye. OK, it was more like in the blink of 9 months and 25 exhausting hours. I was thrust into the most exciting and terrifying adventure of my life in my role as a new mom. Sometimes I still have to repeat it multiple times before it really sinks in. I am a mom. I am somebody’s mom. I will be somebody’s mom for the rest of my life. 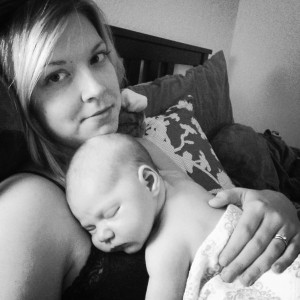 One of the only photos of the two of us in her first two months of life.

Although I remain immersed in the world of education via many different channels, my recent transition into motherhood has inspired me to add some new topics to my writing repertoire. Not to mention that this new life has currently taken over just about every brain cell that I have. These days, I can’t think about too much besides diapers, tummy time, parenting styles, breastfeeding, swaddling, and sleeping. I have always excelled at the majority of the pursuits that I’ve taken on in my life, but I will be the first to admit that my first two months of motherhood has been hard. Really hard. Despite my best efforts, it was impossible for me to prepare for just how much my life would change, or how much of a challenge being a new mom would be.

In these early months, I could only describe my new life at home with baby as survival. We were not thriving. We were not living. We were simply surviving together. Every hour that we survived seemed like a miracle, largely due to my lack of confidence in my mothering abilities. All of my energy went into making sure that my baby was surviving, and sometimes all of the energy that I had didn’t feel like it was enough. I felt guilty that the very best that I had to give only ensured her basic survival, and that I had to let go of so many of the special things that I had planned on doing with her just so that we could survive. When she turned four weeks old, I realized that I had become so caught up in our world of surviving that I had failed to take any photos with my new baby in her first month of life, had not purchased a baby book for her, and had gone 16 days without washing my hair. I also found it very challenging to suddenly give up my career. My identity has always been very closely tied to my role as an educator, and having to form a new identity as a mother overnight was incredibly overwhelming. 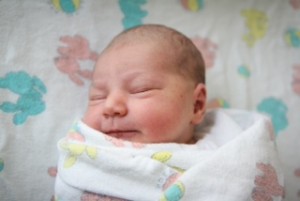 Those rare smiles in the early weeks gave me confidence that not only was she healthy, but also happy.

At this point, I knew that I needed help. When my husband was home, he was the most caring, attentive and helpful person in my life; but his work commitments and our dependence on his income did not afford him much time off from work. So I reached out to friends who had young children for advice, we started receiving our first visitors who came over with the sole purpose of helping me adjust, and we hired a postpartum doula. Although the extra help did wonders for my nutrition and hygiene, what I gained the most from my growing support system was the reassurance that surviving was more than enough for my fresh babe. She didn’t need photos, a baby book, or for her mama to put makeup on every morning. What she needed was to be kept alive – to have a clean bum, warm toes, a full belly, and plenty of snuggles. I realized that I needed to drop the “simply” from the beginning of the phrase “simply surviving,” because there is nothing simple about it. Surviving is a huge deal. Keeping another human alive is the hardest thing I have ever had to do, and right now surviving is more than enough. I am doing more than enough.

One thought on “Simply Surviving”